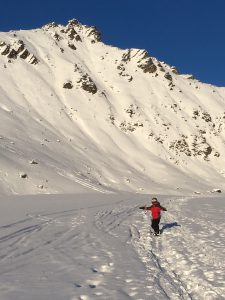 Iâ€™m pretty sure that my wife and I got to the bottom of the mountain thinking that a divorce was eminent. Okay, I’m being a little dramatic here, but I found theÂ situationÂ ironic because we fell in love skiing. Amazing how unmet expectations can lead to a midlife marital blowupÂ â€¦ even after 20 years of skiing together.

It was a blue-bird day and bitterly cold with the wind blowing temperatures down to minus 10 degrees. But we were out for the third weekend in a row backcountry skiing with our two young boys. It was the first time since our eldest was born that my wife and I had been on skis together for three consecutive weekends and we were both giddy.

Our 8-year-old is the weak link in our backcountry adventures. Heâ€™s still getting his mountain legs and tires just as the slopes start to get steep enough to be fun. On this trip he soon peters out, hits the deck, and wonâ€™t get up. I did my best to cajole him to press on, but he wasnâ€™t buying what I was selling. So my wife was left to soothsay him to a recovery and back on his skis. But even she was challenged becauseÂ he was headed toward a full-blown meltdown. I had missed out on the luscious higher slopes the week before because I had stayed behind when he was overcome by inertia in this exact same spot.

This time I ski on and catch up with our 12-year old whoâ€™s up ahead and has been shredding it on the telemark gear he got for Christmas. Heâ€™s waiting patiently but getting cold. So my wife and I agree that I will continue on with our oldest so I can get the turns that she enjoyed the previous weekend.

My eldest and I topped out about 20 minutes later, got an awesome view and the obligatory selfie, ditched our skins and pointed our skis down. Yeehaw! The snow was bliss and I was really enjoying the first true backcountry ski with my son. It was a winter highlight for me.

We soon rejoined my wife and youngest at mid-mountain. My wife was clearly agitated and her first words were a sharp â€śI didnâ€™t expect that youâ€™d be gone so long â€¦â€ť I heard accusation, disappointment, and blame in her tone. I felt attacked so I parried and the war of words began … it was a major marital face plant. And thatâ€™s how we ended up at the bottom of the hill far from the giddiness that started our day. But it didnâ€™t have to go that way.

In my work with men in midlife I help men find ways to increase connection with their partners, kids, and even co-workers. On the drive home that afternoon I recalled the tools that could have avoided that mid-slope disaster. I share them with you here in the hopes that youâ€™ll be successful should you find yourself in a similar situation.

Thatâ€™s often my first mistake â€¦ I take my wifeâ€™s disappointment and unmet need personally and then take responsibility for her feelings. ACK! Then I feel guilty and then I get angry, both at her for dumping her unmet expectation on me and at myself for immediately thinking I had done something wrong. Yes, she was disappointed, but remember, we had agreed that I would go up and get some turns with our oldest.

To diffuse it, I needed to recognize that her disappointment (and more importantly, what was underneath it) may not have even been about me. It turns out it wasnâ€™t. And rather than get defensive or mount a counter attack, I needed to play the name game â€¦

Tool #2: Name what you hear

Instead of taking it personally, I needed to reflect what I was hearing. Something like, â€śHuh, sounds like you had an expectation that …â€ť Or, I could have named the tone, â€śIâ€™m hearing a lot of frustration right now.â€ť

Just identifying whatâ€™s in the space between the two of us could have diffused the situation by allowing objectivity, rather than defensiveness, to guide the conversation.

Tool #3: Be curious about what you hear

Once you name it, you can get curious about what it might be, and more importantly, whatâ€™s underneath it. So instead of defending I could have asked, â€śHow did it go with the youngest?â€ť Then â€śOh wow, he had a complete meltdown and ranted for 15 minutes? Sounds like a nightmare! Poor you, I imagine that you must be tired/frustrated/exhausted/etc.â€ť

From a place of curiosity I could have been much more empathetic and much less defensive.

The repair is another great tool for marriage in midlife (or any phase!). Rather than stew on it (or avoid it), I broached the subject of our face plant during our drive home. I owned up to my part of it (immediately going on the defensive) and she, hers (forgetting to employ a soft start). We also explored what we could do differently â€śnext time.â€ť Thankfully we were able to repair the damages of our war of words and recover so that our family evening was salvaged.

Lesson learned: while repairs can be helpful, avoiding war in the first place is always less painful.

I hope that you found these tools useful! Have you ever found yourself regretting a response or headed pell-mell for a marital face plant? What did you do to recover? Share out in the comment section below!